Just recently, I was fortunate enough to spend some time watching and photographing Otters. It was joyous. By the end of my shoot, I don’t know who was the most tired. The playful Otters or their photographer endeavouring to take their photograph!

I have always held a soft spot for Otters, probably because they are so adorable. Given the opportunity to photograph them, I jumped at the opportunity.

Eurasian otters are adorable creatures. They have beautiful, short, brown fur that makes them look fluffy and cuddly. They have cute baby faces and are very playful creatures. They have been seen sliding on their bellies through snowdrifts and mudbanks. The adults and juveniles play around, gallop, trot, slide and chase one another in the water. This behaviour is to possibly prepare them for hunting. They may look innocent and cuddly, but they are still fiercely territorial wild animals. 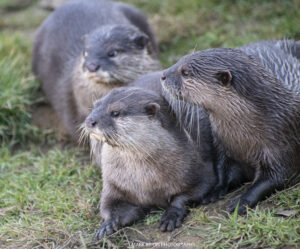 The Eurasian otter (European otter) is a mammal native to the continents of Asia, Europe, and Africa. Their habitat range around the world is truly extensive, covering countries like India, China, Russia, the UK, Latvia, Portugal, Ireland and many others. Land and water are both equally comfortable habitats for the Eurasian otter.

It is never far away from water bodies like ocean shores, lakes and rivers and it builds nests in places like earth tunnels and boulder piles. It is a very territorial animal and just one otter may need 1-4 miles of territory.

It is a mostly solitary animal only getting together with mates for breeding, which may happen at any time of the year.

It is listed as a Near Threatened species by the IUCN because of poaching and habitat loss.

Eurasian otter (Lutra lutra) is a semi-aquatic mammal and belongs to the Mammalia class of animals.

The exact number of Eurasian otters in the world is unknown because they are spread over a very wide range, all around the world.

As the name suggests, the Eurasia otter (or the European otter) are most abundant in the continents of Asia and Europe. However, the Eurasian otter is now an endangered species in South Korea.

Eurasian otters (Lutra lutra) nest in land and water. These otters tend to inhabit streams, peat swamps, and freshwater forests, lakes, and rivers. They are also seen in rice fields, fjords, ocean shores and caves. The terrestrial Eurasian otter habitat is always next to a water body.

The dens and dry nesting areas of Eurasian otters are in a range of different places like earth tunnels, boulder piles, tree roots, shrubs, and near any river bank. Within their 1-4 mile territory, they have a fixed path to get in and out of the water, and fixed spaces to roll around, sunbathe and slide on. These spaces are called otter stairways.

Eurasia otters are mostly solitary animals. They are sometimes found in loose-knit groups of six otters but never in a complete family. They are also seen in pairs when breeding and sometimes the mother is seen with the young.

Eurasian otters generally live to be around 22 years of age.

They are thought to be polygamous animals, mating with more than one partner. Male and female otters do not associate with one another when they’re not breeding. Eurasian otters can breed any time of the year since the female otters have an estruses cycle that is continuous. They breed on land or in the water. Whether they breed or not also depends on the sexual maturity and the physiological states.

The gestation periods lasts for 60-70 days, at the end of which 1-4 pups are born. The young Eurasian otter pups weigh 0.2-0.3 lb at birth and open their eyes after four weeks. They leave the nest after two months and are weaned when they’re three months old.

The months of February, March, and July see most breeding activities in the Eurasian otter species. The mother otters stay with the young pups for  approximately 14 months. The pups reach adulthood when they’re two or three years old. 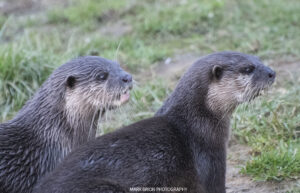 What is their conservation status?

The conservation status of the Eurasian otter (or European otter) species according to the International Union for Conservation of Nature is Near Threatened.

Eurasian otters are an overall brown colour and they have cream or pale undersides. They have long and slender bodies. Their bones display osteosclerosis, wherein the density is increased in decreased buoyancy.

Eurasian otters have short necks and broad faces. They have small legs and thick tails. They also have webbed feet and sensitive whiskers around the snout that help in locating prey.

Female otters tend to be shorter than males. They are also able to close their small ears and nose when underwater. Their short fur is also capable of trapping air which helps in insulating against cold.

How do they communicate?

Eurasian otters are vocal creatures who communicate via calls. They have different calls for greeting, mating, alarm, and 12 others. The calls include short and shrill whistles, whimpers, yelps and high-pitched screams given in times of distress.

They also have scent glands near the tail’s base which give out a musky, heavy smell. Marking with scent is done for establishing territory and for giving the identity as well as the sexual state. Eurasian otters also mark logs and vegetation with their musky scent. 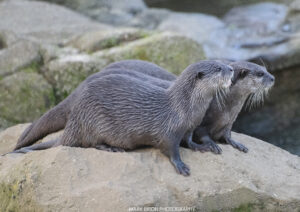 How big is a Eurasian otter?

How fast can a Eurasian otter swim?

Eurasian otters are excellent swimmers who can move at speeds of 7.5 mph (12 kph).

They also have big lungs and can slow their heartbeat down, enabling them to stay underwater for four minutes. 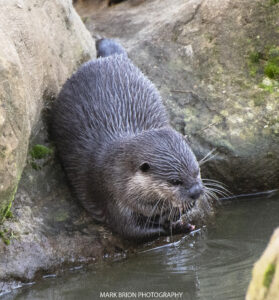 How much does a Eurasian otter weigh?

What are the male and female names of the species?

The males and females of the Eurasian otter species do not have specific names.

What would you call a baby Eurasian otter?

A baby Eurasian otter is called a pup or a whelp.

What do they eat?

They use their whiskers when underwater to detect fish and prey movement. They are able to hunt for fish in muddy and dark waters too. European otters are known to consume food multiple times, eating close to 1 kg of food each day.

Eurasian otters themselves get preyed upon by birds of prey, dogs, crocodiles, wolves and Eurasian lynx. 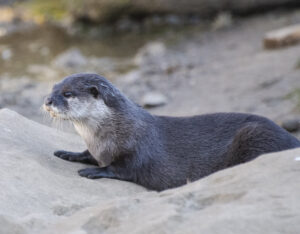 Would they make a good pet?

No, the Eurasian otter species would not make a good pet. It is a wild animal that is aggressive about its large territory. The Eurasian otter would not do well in captivity at all. Because of their cute appearance, there has been illegal poaching of wild otters, especially Eurasian otters, which needs to stop. It is illegal to possess otters in many regions, including the USA.

Why is the Eurasian otter endangered?

The Eurasian otter is not an endangered species but it is Near Threatened. This is because of the population has declined over the past 23 years. The species was declared Near Threatened in the years 2004 and 2008 too. The species is very sensitive to change in habitat. Over-exploitation is another problem.

The Near Threatened listing of today is more precautionary since there seems to be a population recovery of the species in western Europe. But increased poaching of European otters and habitat loss in the Asian regions is very concerning and the species may end up becoming endangered. Its population is already endangered in the Asian country of South Korea.

How many Eurasian otters are left?

Despite several efforts and studies, the total Eurasian otter populations are not known, mainly in their habitat range in Asia and North Africa. There were 19,395 individuals in the UK in 2004. There is little information from Asia, specifically China, because of the heavy poaching there.

Thanks for your time.

Be the first to know about future workshops, tours, vlogs and more. I will respect your email privacy.